Dr. Monideepa Das, with a Post-Graduate degree in Medicine from…

Boat ride along the rocky cliff

The clear water of Umngot River

Sohra, the original name for the world-famous Cherrapunji, is an amazingly beautiful place with some breathtaking tourist spots. It should definitely be included in your bucket list of holidays. This is Part II of a III Part story on Meghalaya. Read on and enjoy…

We left Shillong for Sohra soon after an early breakfast. Sohra, the new name for the world famous Cherrapunji, is actually the original name used by the local Khasi people. This misty, cloud-covered town, located high-up in East Khasi Hills and overlooking plains of Bangladesh became Cherrapunji as a result of mispronunciation of ‘Sohra’ as ‘Churra’ by Britishers.

However, at the behest of the Khasis, ‘Sohra’ has been restored. Our drive from Shillong to Sohra is an experience beyond words. It’s a unique life experience. We drove along meandering roads, up and down hills and dales, enjoying mesmerizing beauty as far as our eyes could see, and playing hide and seek with the clouds. Light showers kept us company throughout the 85 km stretch until we reached Dawki Village in Jaintia Hills district located along the Indo-Bangladesh border.

I stuck my head out of the car window and looked downwards and gasped at the fascinating sight. The still, sea-green water of the River Umngot flowing below, with a row of colourful country boats tied neatly on its banks, reminded me of a picture postcard. We stopped and followed our driver down through natural, manmade steps, making a descent of 50 metres to reach this amazing river, where we paid a fee for a one-hour boat ride.

It turned out to be one of the most amazing experiences, so sublime and surreal is the beauty of the river and its surroundings. The water was cool and absolutely crystal clear; so much so, that we could see pebbles and stones at the bottom of the river bed and schools of small fish which swam along the boat. Other boats floating on the still, deep, water appeared as if they had been placed delicately on a glass surface.

Our boat man proudly announced that Umngot is the cleanest river in India. Except during summer when it turns a little muddy, the river remains green and crystal clear throughout. He also added that the locals make sincere efforts to keep the river clean and free from pollution.

He steered expertly alongside rocky cliffs, taking us towards a rope stretched across the breadth of the river – the international border of India and Bangladesh. What is impressive is the apparent friendship between Indians and Bangladeshis on either side. Even the Border Security Force officers on both sides share a camaraderie. What made our visit even more memorable was that a few young girls from across the border walked across to shake hands and enquired if we would care for some tea.

We also caught a fascinating sight of the long suspension bridge over Umngot. It was built by the British in 1932 and connects the Jaintia and Khasi hills. It also connects the Indo-Bangladesh border with Dawki. After rowing for a while, we reached Amoan Island where we got off and walked over to the stony bank. Colourful tents on the banks tempt tourists to stay back and camp overnight.

Local people, mostly women were busy fishing. Fishing is one of their sources of livelihood. Tourism also adds to the income. They offered their fishing rods to us urging us to try our luck. We were however, content to relish the freshly fried fish at one of the shack-like stalls. Thereafter, we rode back to the starting point. Of course we captured some priceless pictures and videos of this beautiful and unique tourist spot of Meghalaya.

We stopped next at Nohwet Village, about 2 kms from Mawlynnong, to see the Living Root Bridge. It took us about 15 minutes to go down the steps, some quite steep, to reach the bridge. The place was crowded with tourists and we were allowed to go across the bridge after paying the entry fee.

Although I did not have any preconceived ideas about living root bridges, I was surprised to see that the bridge was wider and sturdier than I had expected. The century-old bridge of interwoven and entangled live roots of the Indian Rubber Plant (Ficuselastica) stretching across Thyllong River is a natural wonder. Although we were allowed to go across the bridge, we were instructed not to stop midway. The guards blew the whistle the moment they caught sight of someone breaking any of the set rules.

The bridge is fascinating and so is the surrounding greenery. A stream of water gushing over the bed of boulders was a pretty sight to behold. While stopped we stopped at one of the stalls as I was unable to resist the temptation of the pomelo fruit (robaabtengaa in Assamese). I bought myself a portion served neatly on a biodegradable eco-friendly plate.

A Study in Bibliophilic Journey – Part 2

Although it was drizzling heavily, we were able to make out the virtually inconspicuous sign Mawryngkew Sharatia, close to Mawlynnong. Here we stopped to see the Balancing Rock. This huge rock appeared as if it was floating in the air. It is actually a large rock sitting on a small rock tucked underneath – creating the illusion of a suspended rock.

We drove to the Mawlynnong Village located in East Khasi hills along the India-Bangladesh border (about 90 kms from Shillong) where we stopped for lunch. This village which falls under the Pynursla Community Development Block has been declared the ‘cleanest village in Asia’ by Discover India in 2003. It is also known as ‘God’s Own Garden’.

We enjoyed delicious local food in a spotlessly clean restaurant; after which we walked up to the Sky View point atop a tall tree from where the plains of Bangladesh can be sighted.

The drive from Mawlynnong to Sohra took more than the usual two and a half hours because it had already become dark and also because of continuous downpour. We reached Jiva Resort where we had booked our stay and after freshening up, we had a leisurely dinner and called it a night. Dr. Monideepa Das, with a Post-Graduate degree in Medicine from Assam Medical College Dibrugarh, she is a Physician by profession and a homemaker by choice. Penning down thoughts, ideas, experiences and travelogues is her passion. Travelling and cooking are her other deep interests. 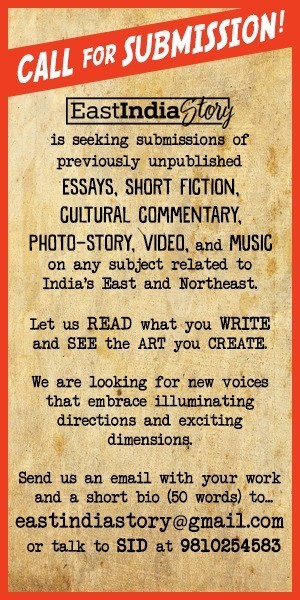 Bihu – Then, Now and In-Between

The legend of the two sisters: Ka Ngot and Ka Iam

Meghalaya- A Walk Down Memory Lane